I absolutely love love love living near the ocean, but while the water here might look tropical the water temperature tends to be more glacial.

This weekend when it came time to exercise Maddie I suggested we trade in our usual beach walk for a swim in a lake. We loaded ourselves in the car and drove to Ten Mile Lake Provincial Picnic Park. We were greeted with lovely views and warm waters. Maddie tried to catch an eagle but was of course too slow. 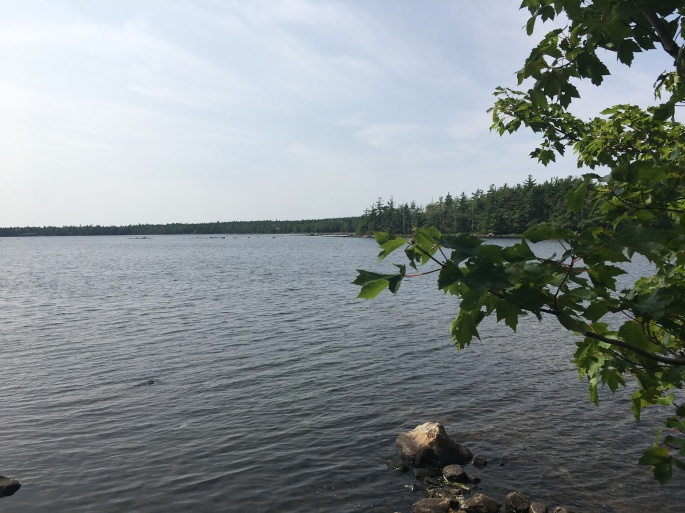 On the way back from the lake we decided to attempt ribs for supper. I say attempt because I haven’t made ribs that taste the way I want them to. I can now say that I was able to successfully make ribs. I really like saucy fall off the bone southern ribs. Now I didn’t make fall off the bone southern ribs for a few reasons I don’t have a smoker and I didn’t have hours and hours to make these ribs but I did succeed in making saucy ribs.

This recipe is a big one, it is literally 8lb of ribs, but it keeps well. You have three options, half or even quarter the recipe, have leftovers for days, or invite some friends over and have a feast. We opted for option number 2 and had leftovers for days. We served our mass quantities of ribs with a simple garden salad, with toasted nuts and homemade vinaigrette.

I decided to rub my ribs with salt, pepper and a little bit of olive oil and bake them in the oven. While the ribs were baking I made my sauce. After an hour in the oven at 350 I smothered the ribs in the sauce and let them bake for another hour. I wanted to get a bit of a charred look so before I took them out of the oven I turned the heat up  to low broil and let them cook for another 5 minutes.

We served our mass quantities of ribs with a simple garden salad, with toasted nuts and homemade vinaigrette. Armed with lots of napkins we dug in, while Maddie waited patiently for us to drop something. 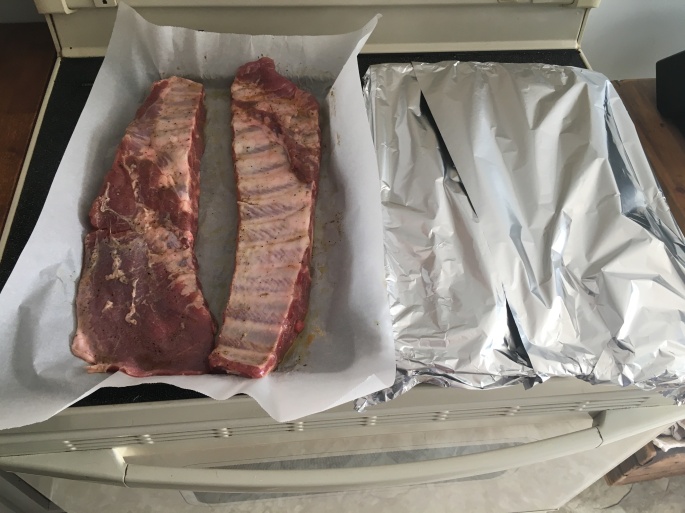 Spice rubbed and almost ready for the oven

Line two large baking sheets with parchment paper and rub your ribs front and back with salt, pepper and a drizzle of olive oil. Cover with foil and bake at 350 for 1 hour.

While the ribs are baking put all the other ingredients in a large sauce pot and bring to a simmer. After your ribs have been in the oven for an hour take them out and cover them with the sauce. Cover again with the foil and put them back in the oven for another hour at 350. Remove the foil and bake under low broil for 5 minutes. Remove from the oven and enjoy.

That’s all for this week. As always let me know what you think of the recipe.

On the blog today I talk a little bit about how wonderful my mum is and I share one of her easy weeknight recipes #piesandpowertools #motherday
I’m a little late in posting but if you’re still looking for an Easter dinner side Maddie and I have you covered #piesandpowertools #maddog #easter
%d bloggers like this: