The past two weeks I’ve been seriously slacking on making real meals. I’ve basically been living off of store bought rotisserie chicken, bagged salads and lots of coffee.  I’ve been busy getting my house ready to list when you add in my regular crazy (self inflicted) schedule something had to give and this time it was homemade meals.

Last night I decided that I needed a real meal with lots of veggies that would be relatively quick and easy. After a little thought I decided on steak fajita bowls. Lately I’ve been making spice blends at home instead of buying the packets at the store. For the fajita seasoning I used the Pinning Mama’s recipe for fajita seasoning. It was delicious and super easy.  I’ll include the link to her blog and fajita spice post in the recipe portion. I highly suggest you have a look around her page there are lots of recipe and diy posts.

This week Sophie Cat and I are on location at my Official Taste Testers house. Mad Dog is having a little vacation with her friends at her beach house. Sophie and I miss her but trust me she is having the time of her life with multiple beach walks a day, two beautiful golden retrievers to play with, and 4 people always willing to snuggle or give belly rubs.

Sophie is also having the time of her life, running down the hall, exploring new closets looking out new windows and always giving me side eye. 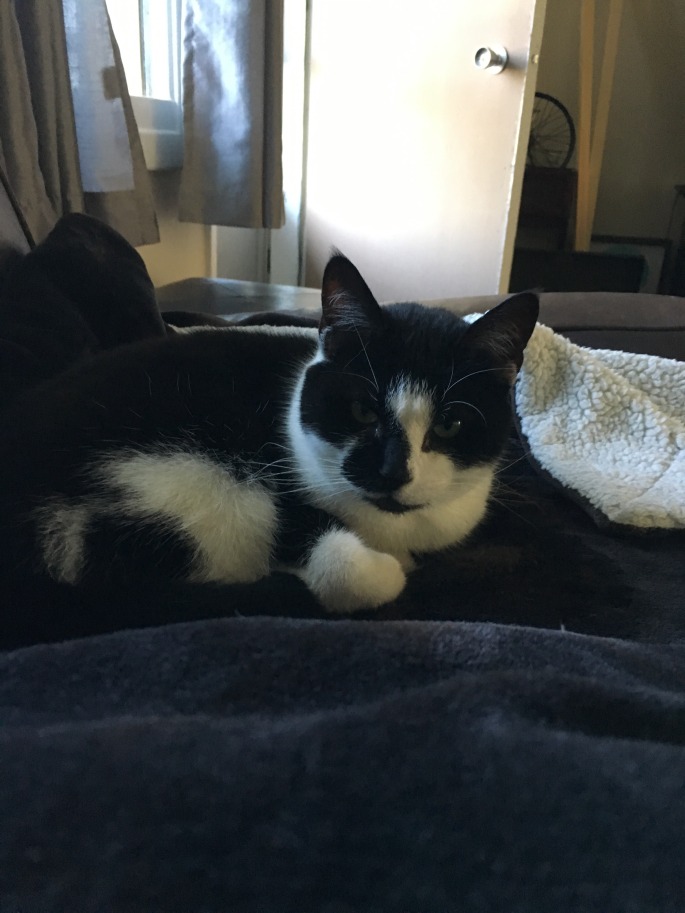 Ok down to business recently I’ve been trying to add a little more spice to my meals. Jalapeños play a big part in this  recipe so if you’re not a fan you can totally omit them or just use less. First I threw together a quick marinade for my steak; a few glugs of olive oil (enough to cover the bottom the pan), 3 cloves chopped garlic, a chopped jalapeño with seeds, and the juice of 1/2 each lemon and lime. While my meat marinated I chopped my veggies.

I chopped the veggies as you can see above, added my fajita spices and baked them for about 20 minutes on 350. While my veggies baked I cooked the steak and made my “rice”. I usually try to choose the lower carb option whenever I can so instead of using rice I used cauliflower. I was lazy so instead of grating or ricing the cauliflower I just gave it a rough chop and threw it in a large frying pan with some olive oil and a little water. Once the cauliflower had cooked a little I added the juice from the other halves of the lemon and lime, some chopped cilantro and 2 chopped jalapeños. When everything was cooked, roughly 15 minutes later, I threw everything in a bowl and dug in.

1lb of steak, I used flank steak because the grocery store didn’t have skirt

3 bell peppers, your choice on colours

First mix your marinade. Cover the bottom of your pan with olive oil, I used a 9×9 baking dish. Chop the garlic and 1 jalapeño throw them in the pan. If you don’t like a lot of spice deseed the jalapeño before chopping. Add the juice of 1/2 of a lemon and lime. Add your meat and give it a few good turns in the pan so both sides are covered.  Now chop your peppers, tomatoes, onions and cauliflower. Put all the veggies except for the cauliflower on a lined baking sheet, give them a toss in olive oil, add the fajita mix, stir an bake at 350 for 20 minutes. Heat a non stick frying pan, once its hot add the meat and a little of the marinade let cook on high for 2 minutes on each side then turn the heat down and allow the meat to cook to your desired temperature. In a separate frying pan add a glug of olive oil, water and the cauliflower. When the cauliflower is almost cooked add the remaining jalapeños, cilantro and juice from the remaining lemon and lime halves. When your meat is cooked remove it from the heat and let it rest for 2 minutes before slicing. Once everything is cooked layer the cauliflower, veggies, meat and serve.

As always let me know if you try this recipe and what you think.

One thought on “Fajita Bowls”

On the blog today I talk a little bit about how wonderful my mum is and I share one of her easy weeknight recipes #piesandpowertools #motherday
I’m a little late in posting but if you’re still looking for an Easter dinner side Maddie and I have you covered #piesandpowertools #maddog #easter
%d bloggers like this: